1.  Now that KUMAIL NANJIANI is super buff, “Men’s Health” had him to do a photoshoot where he recreates a few famous characters, including the superhero Wolverine, Maverick from “Top Gun”, John McClane from “Die Hard”, and Patrick Bateman from “American Psycho”.

(If you care, here’s a video Kumail did for them where he shows off his gym and fridge.  The fridge had a lot of fruit in it.)

2.  RICKY GERVAIS is mourning the death of his 16-year-old cat, Ollie.

3.  ZACH BRAFF posted an old photo from film school, where he looks like a combination of Adam Driver, Dax Shepard, and Ray Romano.

4.  LEA MICHELE is celebrating her one-year anniversary this week.

And JENNIFER LOPEZ and ALEX RODRIGUEZ are celebrating one year since their engagement.

5.  NICOLE KIDMAN and HUGH GRANT are in an upcoming HBO miniseries called “The Undoing”, and they posted a photo of themselves from the set.

6.  This is KYLIE JENNER’s real hair . . . without the wigs and extensions.

While we can’t all be celebrities – Queen Nails can make you feel like one. Or, perhaps…a QUEEN!

Serving the community since 2011, Queen Nails two (soon to be three) Fort Wayne locations host a full-service nail salon while offering a unique bar setting and a wide selection of wines, beers, and cocktails.

Queen Nails will provide you the most trendy and sophisticated salon services.  Their mission is to bring innovations in nail care, with affordable prices and uncompromising quality. 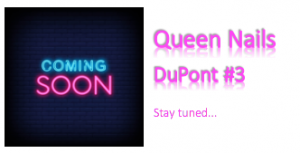 Four Things to Look Forward to in December→