INDIANAPOLIS, Ind. (ADAMS) – The state of Indiana is rich in history.

Did you know the following things happened the week throughout the Hoosier state?

The Indiana Department of Administration compiled a list of notable events in this week’s Hoosier History Highlights.

Identify each statement below as “true” or “false.”

1. Indiana is the smallest state west of the Appalachian Mountains.

2. The first state capital, Corydon, is in Harrison County,

3. The Indiana House and Senate combined have a total of 200 elected members.

4. The highest point in Indiana is in Wayne County. 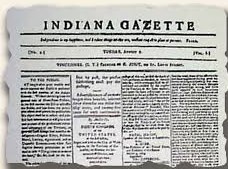 1804 In Vincennes, Elihu Stout published The Indiana Gazette, the first newspaper in the Indiana Territory. Stout, from New Jersey, had come to Indiana at the request of Governor William Henry Harrison when the territorial government needed printing work done. The single-sheet Gazette was issued weekly with an annual subscription charge of $2.50.

1876 The first lots went on sale for a new community east of Indianapolis. Ads for Woodruff Place described “broad paved streets” and “esplanades adorned with fountains and statuary.” Large Victorian-style homes made the neighborhood an attractive and elegant choice for affluent families of the era.

1918 The United States Post Office inaugurated the first two-motor truck routes in Indiana. One truck left Indianapolis for Versailles, and another departed for Bedford. Plans were being made for routes to Cincinnati and Louisville. Postal officials said the new trucks would provide faster service to communities remote from railroad lines. Pictured: One of the trucks assigned to the first routes.

1945 The USS Indianapolis was torpedoed by a Japanese submarine. Of the 1,196 men aboard, approximately 300 went down with the ship. Those remaining were plunged into shark-infested waters. By the time they were spotted four days later, only 316 were still alive. The men and their ship are honored by a memorial along the city canal, pictured above. 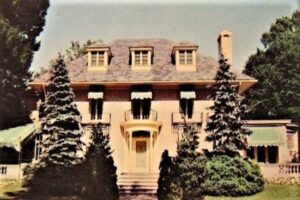 1945 Indiana Governor Ralph Gates and his family moved into the new Governor’s Mansion. The Georgian Revival Home, on North Meridian Street in Indianapolis, was purchased by the state for $72,500. It came complete with furnishings custom made for the home when it was built in 1920. Features included a winding staircase, carved stone fireplace, and a sunroom with stained-glass windows. This home served as the Governor’s Mansion until the early 1970s when a new residence was established a little farther north on Meridian. 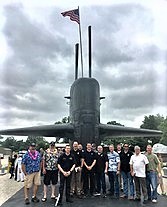 1977 Colorful ceremonies were held for the christening of the nuclear-powered submarine USS Indianapolis. Among the many dignitaries attending the event were Secretary of the Navy W. Graham Claytor, Admiral Hyman Rickover, Indiana Senators Birch Bayh and Richard Lugar, Indianapolis Mayor William Hudnut, and former Indiana Governor Matthew Welsh. Honored guests were 60 survivors of the former USS Indianapolis, which had been sunk by a Japanese torpedo 32 years earlier.

Hoosier Quote of the Week:

“Just make sure, if you fail, you did what you wanted to do.”

There have been four United States Navy vessels named for the city of Indianapolis. The first was a cargo ship which was commissioned in December of 1918. The second was a heavy cruiser commissioned in 1932 and sunk by a Japanese torpedo in 1945. The third was a nuclear-powered attack submarine that was christened in 1977 and served until 1998. The newest USS Indianapolis was commissioned only last year. It is described by the Navy as a “Freedom-class littoral combat ship” which is “fast, agile, and designed for operation in near-shore environments as well as the open sea.” 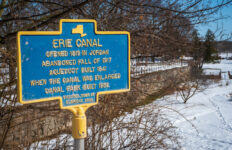