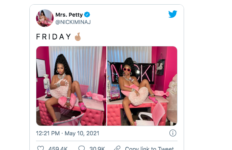 The Celeb Web – Nicki is Good for Business…→

The Latest – NBC News: Vaccines for children as soon as tomorrow→