Did you have any friends in high school with an insanely loud speaker system in their car?  Apparently, EVERYONE had that friend . . .

Cops in Ohio pulled over an Amish horse-and-buggy the other night, about 40 miles east of Cleveland.  And it had a MASSIVE subwoofer system built into it.

The speakers were facing forward . . . apparently so the people in it could ROCK OUT while they buggied down the road at eight miles an hour.

Police found several open bottles inside and towed the buggy to an impound lot.  Now they’re waiting to see if someone comes forward to claim the horse. 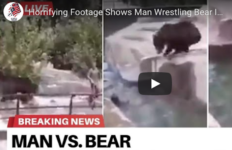 The Best Ways to Get Out of a Speeding Ticket→

Seven Steps for Perfect Ice Cream Eating – According to Science→